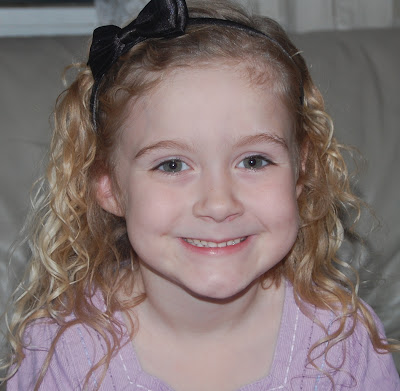 Ryan took his bike test just over a week ago and passed easily, but then his brand new moped wouldn't start! We tried all sorts to get it going, and in the end my uncle came over for dinner on Sunday and tried a few tricks. Eventually it started, we still aren't sure what it was, but we think there must've been an airlock in the fuel pipe. The damp weather doesn't help, so we've had the wonderful inconvenience of it sitting in our hallway every evening, but at least it starts first time now. He fell off it and smashed his wing mirror too this week. Nothing too serious. I'm sure it won't be the last time he comes off. Thank goodness it started working as he started a new job, and its really out of the way with no public transport. He's loving the freedom, being able to nip round to his mates, or down town, plus it only takes him about 5 minutes to get to school now. Now that he's the cool kid with the bike, interested girls seem to be coming out of the woodwork too. I love seeing him grow up.

Not sure where we are on the moving house front. I haven't applied for any jobs in other towns just yet, we need to wait for Ryan to be nearer to sitting his exams first. It's all about the timing! Annoyingly, the rents seem to have gone up hugely in the last two months, which has kind of scuppered our plans a little. I've just applied for a job here, so obviously if I get that and I love it we will be staying local. It's all so frustrating. We really want to foster, and can't until we move, but the moving part is sooo hard.

I'm so glad that it's Sunday today, we took Taylor and Isobel to see Avatar 3d last night and I swear I could've curled up in the cinema and had a snooze. Kit was really grumpy on Wednesday, then when I was at work on Thursday he cried all day for Pete, so we drove miles away to see an emergency doctor that evening, who barely even looked at him and declared it a virus. Good old mothers intuition told me that wasn't right, he was really hot and kept pulling at his ears like he had an ear infection, then he was in bed with us all night with a really high temp screaming his head off. We had zero sleep, I was so knackered at work on Friday morning. I got him an appointment at our surgery on Friday(a miracle, appointments are like gold dust), Pete took him and straight away he spotted that he had tonsillitis and gave him anti biotics. I was ever so slightly annoyed that the emergency doctor hadn't picked up on it the night before, as the poor little mite had suffered all night for nothing. Twelve hours after taking his first dose he was better, though he's been grumpy again this morning.

I probably won't be on here much this month, I'm already a week behind on my coursework, and I have a pig of an essay due at the end of February. Wish me luck!
Posted by Laney at 9:05 am 1 comment:

Kit only started crawling a month ago, and look at him already! 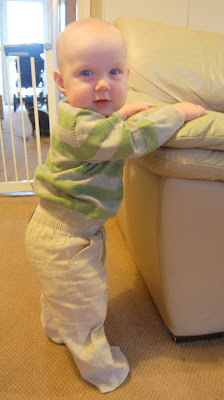 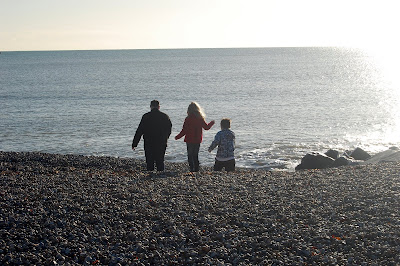 Just after Christmas we had the crazy task of packing for a family of six to go to Butlins for four days. We filled pretty much every suitcase we have, mainly with baby stuff, and squeezed ourselves into the car for the journey. 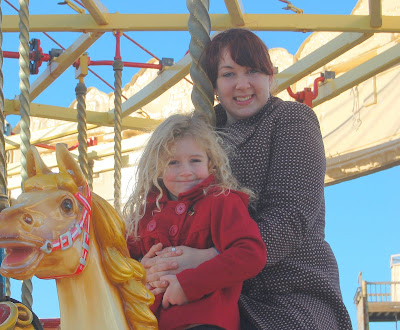 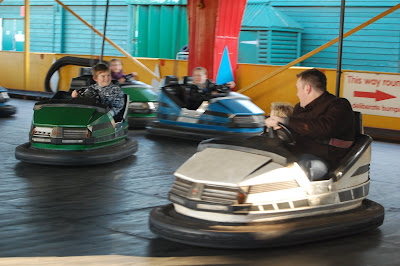 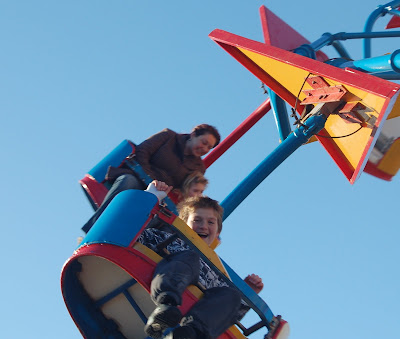 The kids had a great time, I loved getting away from the cooking and cleaning and studying for the week, but it was bloody hard work! Both me and Kit had nasty chesty coughs which meant we couldn't go swimming, and he was a misery guts the whole time.
This photo sums up his mood for the week quite nicely: 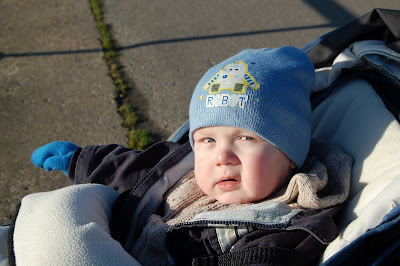 Pete and I took it in turns to put him to bed, so one of us was tucked up in bed by 8pm each night. Yes, even on New Years Eve. Pete and I celebrated the new year by eating cheese and crackers and drinking Baileys in our room. Rock and roll!

Taylor and his one true love 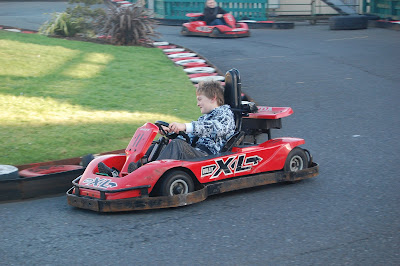 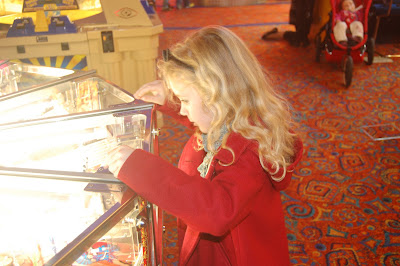 Traditional New Years Day swim. And no, we did NOT join them! 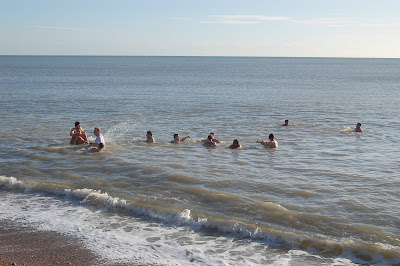 Ryan was sixteen on New Years Eve, so we all ate together and he opened a few presents, and he got to stay out late causing mischief with the two other teenagers that had come away with us. 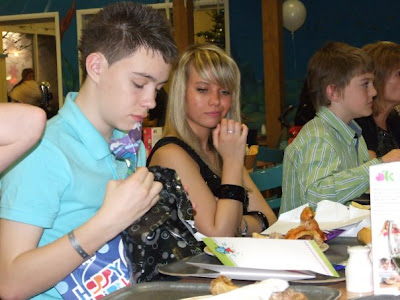 Blimey, sixteen! He'll be leaving school in about 5 months and off to college. Makes me feel old, so it must make Pete feel even older.
Posted by Laney at 10:24 pm 1 comment: 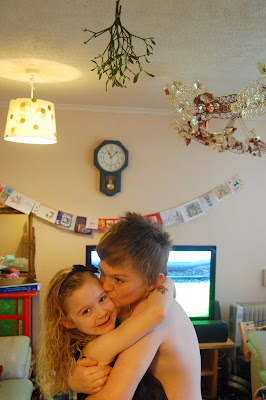 ...after the disappearing blog post debacle the other day I am a little wary. It was a seriously huge, photo filled affair which took me at least thirty minutes to upload, only for it to vanish into thin air. Annoyed was an understatement. It's taken me three days to get over the upset.

So, in December we went to the London Eye with my work; 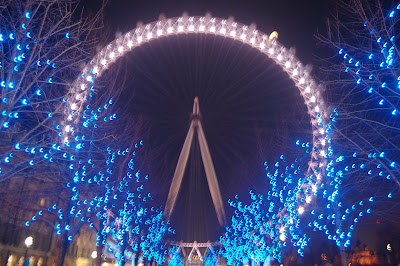 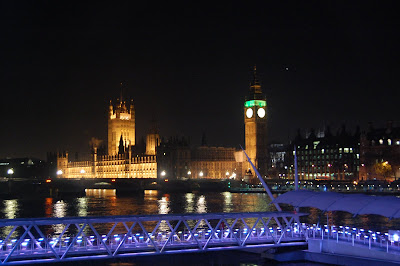 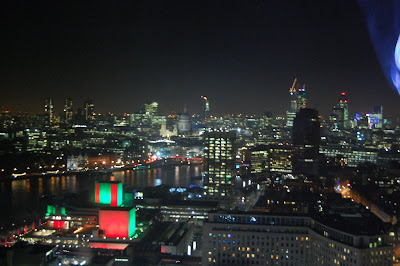 Proof that I do actually have to do some work while I'm out on my jaunts...here I am shepherding some of my charges. 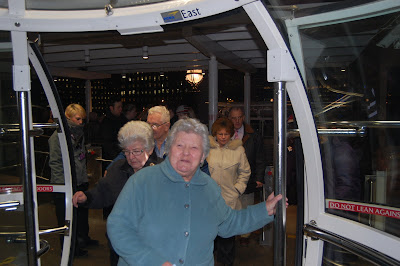 I'd probably lost the other 44 at this point. Wouldn't be the first time.


Then of course we had the mania that is known as Christmas Day. The children opened their sacks in the morning, then the rest of the family came over for dinner. 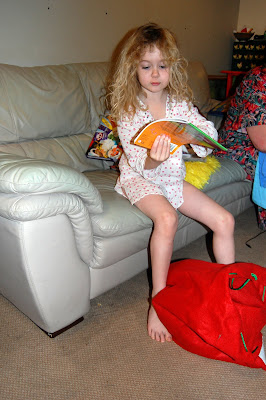 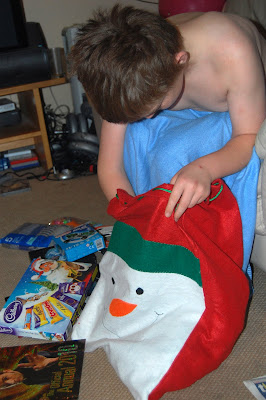 The food all cooked as well as can be expected, given the ongoing battle I have with my oven(the turkey took seven hours), although I did forget to cook the pigs in blankets. We opened our main presents after the dinner, and Ryan got to have a ride on his moped. 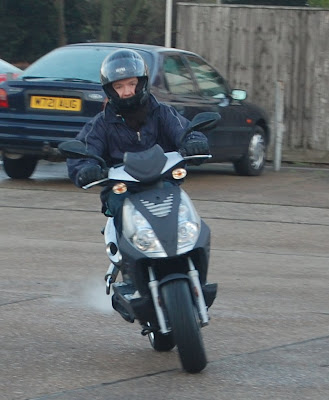 We are still waiting for his license to arrive so he still can't ride it freely on the road just yet. Good news for all members of the public.
Posted by Laney at 9:50 pm 1 comment:

I just typed up a huge catch up blog post with loads of pictures, it saved it as a draft at least 8 times, and now it's gone...grrrr! I'll try again tomorrow. >:(
Posted by Laney at 9:21 pm 2 comments: