We saw one of these whilst we were driving north on Friday, it was weird. I've never seen anything like it. It works on the same principal as a daylight rainbow, where the suns light refracts in the water droplets, except it uses the moons light instead. There has been a huge full harvest moon this week, so that, added to the light rain shower, created something that looked like this; 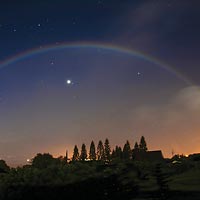 There is more info here .

The boys are getting on really great lately, they have been for a few weeks. They have their moments, obviously, but Ryan has stopped nagging and bossing Taylor around so Taylor isn't so stroppy. It's pretty peaceful here right now. Ryan said I was the coolest parent yesterday because I was letting them have a water fight and fill their balloons up in my kitchen. None of the other Mums would let them. I'm glad they're having fun, they are kids after all. I don't care if they get wet.

We went and had a look at a shop this afternoon, just to be nosy. It's a perfect shop, but it has no parking. Here are some pictures of it. We wouldn't need to do any work to it at all, just change the sign and put in a counter. 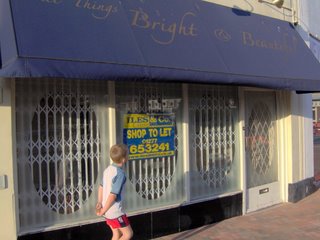 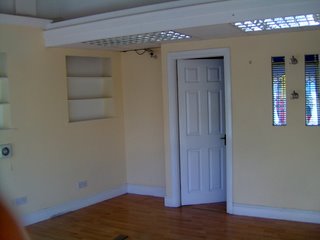 There is a pet shop further up that isn't to let yet, but it does have parking. It needs loads of work though. Pete says the key to it is the location, so I guess we'll wait for the pet shop to come up.
Posted by Laney at 7:52 pm