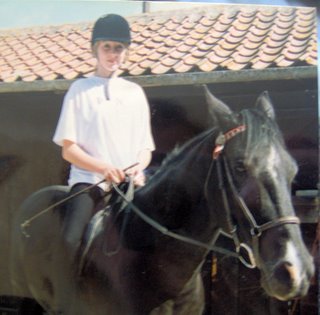 Lara has been talking about us both getting away from the kids and getting some hobbies(apart from clubbing!). We talked today about horse riding, so we're looking into it.
It's made me think about horses I've ridden in the past, and ones I've had. I thought I'd tell you about Rose. I started riding when I was 6/7. My Mum had horses years ago, and my step mum Pauline did too, so it is in the family. I had a few horses that I would ride regularly. It wasn't until I met Rose in 1993 that I got completely and utterly attached. She was a black Thoroughbred mare, about 16hh, and had been used in a few films before the owner of the riding school, Debbie, had bought her. Rose was used in the film Willow. :) I fell totally and utterly in love with her, and that was it. She was mine.

It was winter, and I had gone to the stables very early to take Rose out for a ride. It had snowed overnight, and as it was early and still pretty dark, the snow was really fresh. I tacked her up and took her out into the fields. I remember her breath misting up in the air, and the whole world seemed totally silent.
We stopped on this rise at the top of a field, and at that moment the snow started to fall again. All of a sudden I felt a shift in my consciousness, like the colours around me had changed or moved. She took a deep breath and turned her head round to look at me. I almost heard her say what a beautiful moment it was, and that she'd never forget it or me, but it was obviously a silent communication between us. It's probably one of the most beautiful moments of my life so far, it's right up there with giving birth to my two children.
Then the moment was over, and her feet started to crunch on the snow again and brought me back to reality.
The reason this has stayed so fresh in my mind is that she was put to sleep three months later. She had a degenerative bone disease, and had been existing on pain killers for a while. It was best for her to go.
It was a long time ago now, and it's still my most vivid memory of her. I play it back in my mind all the time, and find it more real than looking at photographs.
Posted by Laney at 8:47 pm

Not that I need to inflate your ego any more but you [i]do[/i] tell a lovely story, I was almost there on the hill with you...

I had lessons as a child, but developed an innane fear of horse and large mammals after the horse that lived behind our house broke into the garden, knocked me down and trampled my sister.

Not so worried about them now, but there's always that little niggle in the backof my head.

you want triangle brackets "<" and ">" for things like that!

I wish you had been there Lara, it was beautiful. :)

Dan, Pete is exactly the same. He can ride, but doesn't trust horses AT ALL! We went horse riding in Malta once. I told them I was experienced so I was given a huge scary horse to lead the ride over the mountains. Pete was put on a lead rein on this tiny fat grey pony. It was hilarious!